The digital subscription version of the Device-Based Therapy GUIDELINES Pocket Guide contains all the same great information found in the physical pocket guide, and can be accessed on mobile devices and online:

For individual use only; contact us for group and site licenses.

The Device-Based Therapy: Cardiac Rhythm Abnormalities GUIDELINES Pocket Guide is based on the latest guidelines of the American College of Cardiology Foundation (ACCF) and the American Heart Association (AHA) and was developed with their collaboration. This practical quick-reference tool contains detailed indications and recommendations for both temporary and permanent treatment of abnormal cardiac rhythms of every type; management algorithms; tables of available devices and monitoring frequency for each indication; and discussions of cardiac resynchronization therapy and implantable cardioverter-defibrillators.

The American College of Cardiology (ACC) continues to transform quality cardiovascular care and improve heart health after more than 60 years of existence through its mission, vision and values. The College is proud of its efforts to bring evidence-based clinical care into everyday practice.

Our mission is to build healthier lives, free of cardiovascular diseases and stroke. That single purpose drives all we do. AHA's Professional Membership is a made up of a robust group of cardiovascular professionals who participate in discovery and dissemination of science. 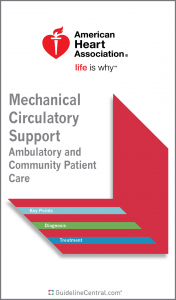 Permanent Pacing After the Acute Phase of Myocardial Infarction (MI)

Permanent Pacemakers That Automatically Detect and Pace to Terminate Tachycardias

Note: All Class III recommendations found in Section 3 of the full text guidelines, "Indications for Implantable Cardioverter-Defibrillator Therapy," apply to pediatric patients and patients with congenital heart disease. ICD implantation is not indicated in these patient populations. (III-C)

a More frequent in-person or remote monitoring may be required for all the above devices as clinically indicated.
Modified from Wilkoff B et al. Heart Rhythm 2008;5(6):907–25.

Table 2. Choice of Pacemaker Generator in Selected Indications for Pacing

This Guideline attempts to define principles of practice that should produce high-quality patient care. It is applicable to specialists, primary care, and providers at all levels. This Guideline should not be considered exclusive of other methods of care reasonably directed at obtaining the same results. The ultimate judgment concerning the propriety of any course of conduct must be made by the clinician after consideration of each individual patient situation.

Neither IGC, the medical associations, nor the authors endorse any product or service associated with the distributor of this clinical reference tool.

Want to save this for later? And your free sample to your Library. Add to Library

Thank you for being a user of Guideline Central!

By updating our privacy policy with clearer language, our goal is to help you better understand what data we collect and how we use that information. When we collect your data through site visits and account creation, we agree to never sell that information to third-parties. This personal information is used solely to provide you a more personalized experience when using the Guideline Central website and app.
At any time, you may opt out of tracking or request account deletion.