Guideline Central highly recommends you use Google Chrome while using this site.

We use these cookies to provide you with improved and customized user experiences.

If you continue to use our website, we request that you provide consent so that we may provide you with the best user experience possible.

Your alert has been saved!
We also created an account for you. Check your inbox to reset your password.

The organization previously known as Institute of Medicine (IOM), now known as The National Academy of Medicine (NAM), released standards for systematic reviews in March of 2011. Since its release, these 2011 IOM Standards (now 2011 NAM Standards) have been the bar in which many organizations and guideline developers operate by when creating guidelines. While […]

It’s been roughly three months since the closure of Agency for Healthcare Research and Quality’s (AHRQ) National Guideline Clearinghouse (NGC) on July 16, 2018. The defunding and closure of NGC left a significant gap in the healthcare community that yet remains to be filled. AHRQ stated that approximately 2.4 million healthcare professionals visited the NGC […]

Recently, you may have heard that the National Guideline Clearinghouse (also known as NGC and guideline.gov) website will shut down after July 16, 2018. This abrupt end to a staple for healthcare professionals is due to defunding of some of AHRQ’s programs. If you are one of the two million visitors to the National Guideline Clearinghouse each […] 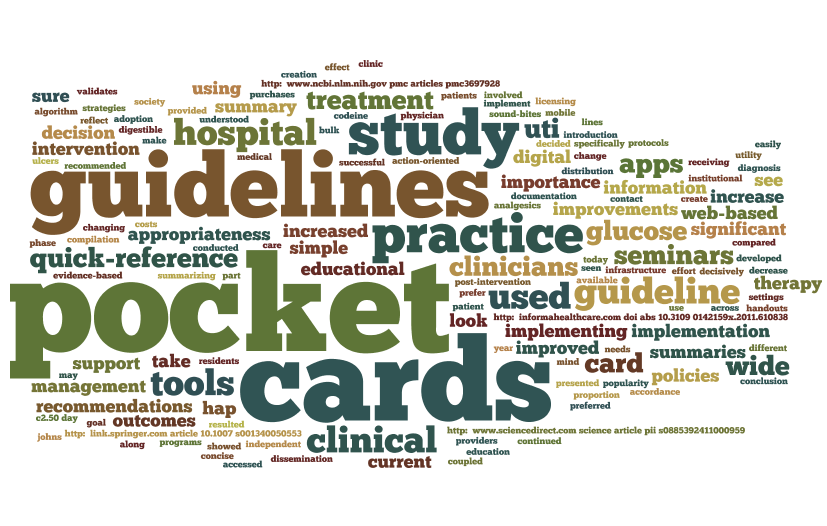 If you haven’t seen our clinical practice guidelines infographic, make sure to take a look. Based on the popularity of that blog post, we decided to create another along those lines. As you may already know, our goal with GUIDELINES Pocket Cards and Apps is improve patient outcomes by making sure clinicians have access to […]